The first one I kind of made on my own and it was about… I think we did that for about $3000.00 dollars tops. And I did end up getting grants to pay back people that I borrowed. And I borrowed money and you know, out of pocket and stuff like that. But $3000.00 is  not.. you know, that’s doable.

But that was like, also like years ago. I know people now who are putting $20,000.00 into their films, their short film. I think now short films are getting that price. Where as before, you know, I don’t know. It’s been awhile since I’ve made a short film so I don’t know. But that led me to get a grant for my second one that I didn’t have to pay anything. I think that grant was like $6000.00.

I think as a student it is kind of easier to make a film because there are a lot of grants either through the school or somebody else. Like you know. You can google film grants and they are like all over the place. And if you get one, you can get your film made. but it’s tricky. It’s tricky. We didn’t have kick starter. I would have killed for kick starter back when I was making short films. Kick starter is really nice, especially for short film because you can basically send a link to everybody that you know and have people put $5.oo here and $5.oo there to get your film made. And then you have a great distribution process by giving the the film digitally. It’s not a lot of work, but it’s also like, people actually get to see your first project. 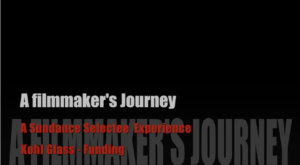